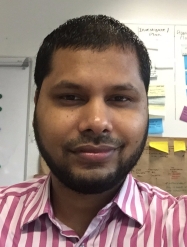 As part of our series sharing the voices of people who stammer,  Mo Rahman from the Department for Business, Energy and Industrial Strategy talks for the first time about his relationship with his stammer.

As far as I can remember, I have had a stammer since I was 7 yrs old.  As I became aware of the difficulty I was having with my speech, it became progressively worse as I grew older.  I didn’t have much support at a young age and coming from a family background where speaking fluently and showing one’s wit was prized highly, you can imagine what affect that had on me.  Being a person who wanted to speak his mind and not being able to verbalise my thoughts didn’t help either.  And to top it all off, I was a very self-conscious person, and this meant that every time I spoke I became very conscious of what other people might say about my stammer.

I never got the sense as a teenager growing up that I was who I wanted to be, or rather, I was not being myself.  It felt like I had to put on an act in order to minimise the impact of my stammer; on myself and to those around me.  And therefore avoid the embarrassment and ridicule that comes with it.

So I stayed silent when I wanted to speak, pretended I couldn’t read well so as not to be asked to read aloud in class (I dreaded English despite having a love for books!), and didn’t engage as much as I should have or wanted to.   This act carried on to other parts of life; every interaction with another human being revolved around how can I minimise or hide my stammer?

Little did I know that this was having a negative psychological and behavioural effect on me.  In effect, what I was doing was rejecting myself; my intellect, my interests, my personality…my self-worth.  It was a downhill spiral.

Now, while this was going on my head, I was actually achieving success in many other things.  I was one of the best students in my class, I doing well educationally, won awards, the first in my family to attend university and well-liked by my friends and peers.   But for me success was speaking fluently, all the other things I had achieved were not enough!  Every success was tainted because I had a stammer.  I began to realise I needed help but didn’t know where to go.

My first year at university was awfully hard.  I wanted to fit in, impress my peers, do class presentations (argh) and achieve my grades!  But again stammering got in the way.  Things got so bad mentally, that I desperately needed someone to speak to.  This was when I first came across counselling provided by the university.  I learnt that speaking about my stammer to someone actually helped me offload and remove a lot of inbuilt barriers and insecurities!  By talking about my life I could put things in perspective.

However, similar fears started to creep up again at work and family life. I needed more help and quickly.  I sought help from CityLit Stammering Therapy courses.  Slowly I began to understand myself better, that stammering was a part of me, it’s OK. I should accept it…it’s my birthmark.  I am more than the speech I utter, I am my personality, the passions I have in life, my hobbies and the many things that I have achieved and continue to achieve.  In affect I slowly learnt to find my identity, my self-worth  And I began to feel at peace with who I was…finally living in my own skin.

Don’t get me wrong though, I wish I could speak fluently…but not everyone get what they want.  I need to accept who I am and be thankful for what I have.  I will carry on in life with my stammer…it’s a unique way of speaking.